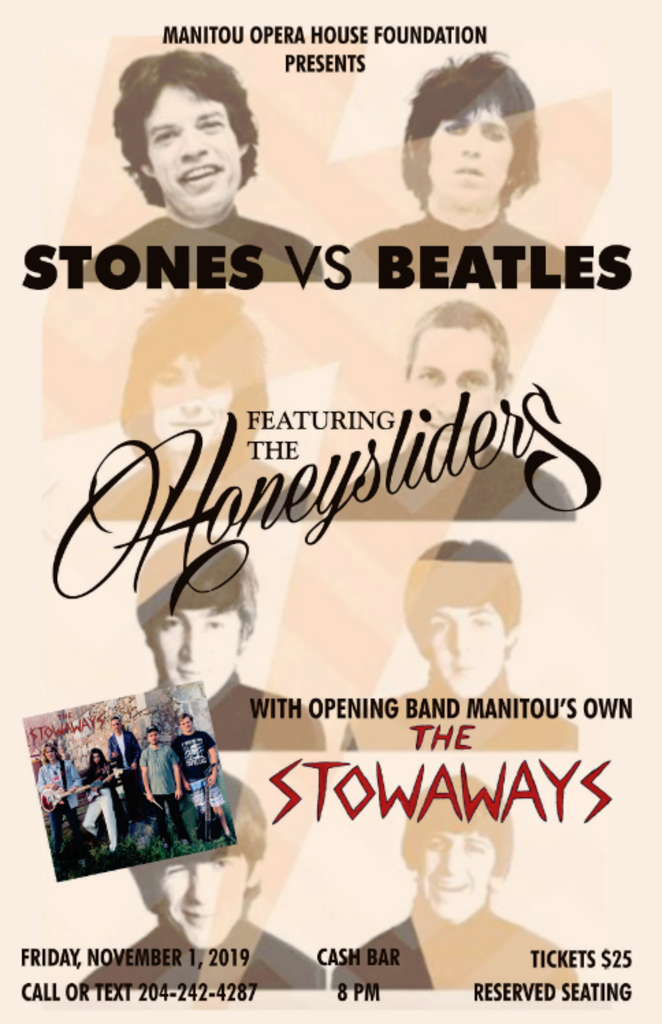 STONES vs BEATLES featuring THE HONEYSLIDERS in concert at the Manitou Opera House
with opening band Manitou's own THE STOWAWAYS.
Friday November 1, 2019 8pm
Tickets $25 Call or text 204-242-4287 Reserved Seating
CASH BAR
Take one part dirty country, one part honest, prairie vocals, and one part party-rock band and you get…The Honeysliders.
Birthed from the popular Winnipeg cover band, “James and the Giants," founding members Jamie Buckboro and Micah Bell felt they had something more to say. Banding together with keyboardist Alex Campballse (The Bros. Landreth, Imaginary Cities, JD Edwards Band, Sweet Alibi) and veteran Winnipeg drummer Jesse Miller (Romi Mayes) the boys found their sound and The Honeysliders were born.
Channeling The Band and Neil Young, these boys put on a show that transports you to a time when bellbottoms and moustaches ruled the world and albums were played on turntables (as God intended).
An all-star cast of Winnipeg's music scene mvps, the Honeysliders are the ultimate house band. Their diverse stylings and unmistakable chemistry makes every song feel like a prodigal return. So put an arm around your partner-in-crime and raise a cup to hometown pride, because any member of this band can step forward and break your heart or blow your mind.

Posted by Lindy Sharpe under Music/Art in Pembina Valley.